Which type of Disc Injury is it? 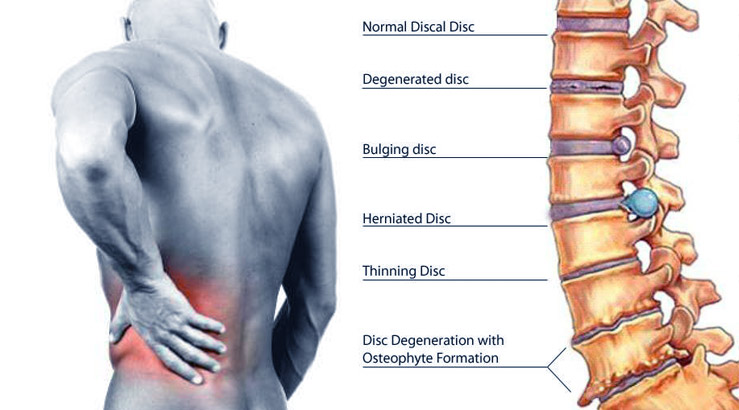 Peak Potential Family Chiropractic sees great success helping people with being their herniated disc chiropractor and helping with other disc issues. Before you begin care we like to look over any past diagnostic testing you may have done in order to properly diagnose your disc injury. This is because when it comes to our patients health we like to be as spot on as possible before we begin to work on something that may turn out not to be exactly what it was presumed to be. You may have heard many terms for Disc Injuries such as someone needing a herniated disc chiropractor, or needing Bulging Disc pain relief treatment, have a Disc Protrusion, or Ruptured Disc and even a ‘slipped disc,’ but these terms get a little misused and tend to be incorrect. The term “Slipped Disc” is actually a rather inaccurate term, as discs actually cannot slip out of place. With this in mind, you can see why we like to be as thorough as possible when dealing with Disc Issues. Proper diagnostics of not only the disc but the condition of the spinal bones around is the key prior to beginning a successful treatment plan.

What is a Spinal Disc?

The spinal column is made up of individual bony blocks called vertebrae.

The spine is able to bend, move and twist because of the discs which are flexible, shock-absorbing cushions that lay between each of the vertebrae. Each Intervertebral Disc is flat and biscuit-shaped and has a jelly-like center called which is called the nucleus and an very strong outer layer of skin which is called the annulus. If you are in need of a herniated disc chiropractor, a slipped disc chiropractor, a bulging disc chiropractor, or have a pinched nerve, Peak Potential Family Chiropractic – Houston Heights is the right chiropractor doctor office for you. We treat all forms of chiropractic injuries and stressors that happen in and around the spinal column. Dr. Sean Beukelman has been treating patients for years now, and we are an up and coming Houston chiropractor.

What is a ‘slipped disc’?

As pointed out above, discs can not actually slip. The discs are firmly attached to the spinal vertebrae. They can however wear, degenerate, split or herniate, but they can not slip!

A normal, healthy disc is very a very strong stable area. Disc’s are actually stronger than the vertebrae itself. If you have what is referred to as a compression injury within a healthy spine, it is more likely for it to cause a fracture in the vertebrae than it is a disc injury. Over time as your body gets more bumps and bruises, encounters improper lifestyle events like sitting to much or poor posture, the disc undergoes wear and tear or following cumulative strain from repeated bending, twisting, and lifting, the strong fibers of the annulus can tear, this will allow ‘leakage’ of the nucleus area out of the disc’s center. This is what is referred to as a Disc Herniation. If you are in need of a herniated disc chiropractor, Peak Potential Family Chiropractic – Houston Heights is accepting new patients that have disc injuries. We treat disc injuries such as:

A inflammatory reaction is often the result of the disc leakage and sometimes will put pressure on the spinal nerve that runs directly next to the disc, resulting in leg pain (Sciatica), (this can happen in one or both legs) if it affects the discs in the low back or, in arm pain if it happens to the discs in the neck.

You may also experience pain from the disc without herniation, just ‘internal’ damage to the disc itself, when that happens you are less likely to get the traditional signs of sciatica.

Ready to Make an Appointment to learn more or see if you are a candidate for care at at Dr. Beukelmans office?

Is needing a herniated disc chiropractor a common problem?

The most common cause of sciatica is referred pain from the muscles, joints and ligaments of the spine as well as the bones shifting ever so slightly putting pressure on the nerves. Not actual Disc Injury.The term ‘slipped disc’, Herniated Disc, & Ruptured Disc are all terms that are used quite frequently and interchangeably as a diagnosis of back pain, but contrary to popular belief, disc herniations are not as common as you may think. Regardless, if you are looking for a herniated disc chiropractor in the Houston TX area, Book an appointment with our Chiropractic office today.

It is estimated that only about 3-5% of patients who consult their family doctor in regards to lower back pain do so as a result of a Disc Herniation.

The annual incidence of Disc Herniation is said to be in the region of 0.1 – 0.5% of the general population between the ages of 24 – 64 years and it is most commonly seen in the ages between 30 – 50 years old.

Although not as common, at times a disc injury can potentially be a very serious injury. It is the sort of injury that sometimes requires surgery but fortunately only in a small number of cases.

It is important to understand that it isn’t the Disc Herniation per se that causes the pain in most cases but the inflammation itself.

Surgery should be avoided at all cost due to the health risks in general and most Disc Injures have many other options open to them other than surger. Surgery is sometimes necessary though, especially if your bowel and bladder control is affected after letting something go on for far too long. Also that may be a sign of a rare but important complication causing what is called, cauda equina syndrome.

What can I do to Avoid Disc Injuries?

Reduce the pressure on your discs by: Disc Injury can be a mild tear on the outside of the Disc or a more serious tear which is a Disc Herniation. Unfortunately, every time you bend forward, more intensely if you are holding a load and you sit while doing so, you are at a greater risk for Herniation.

Risk factors for developing a Disc Injury are:

You can protect your spinal disc structures if you practice bending correctly, sitting correctly and you keeping your back and stomach muscles strong. Also avoid exercises that involve repeated bending or twisting even if it is while sitting.

Peak Potential Family Chiropractic – Houston Heights is a herniated disc chiropractor and treats disc herniations, ruptures and many other types of disc injury and many legit, scientific studies have shown that a high numbers of patients find relief with Chiropractic treatments. It has also been shown that Chiropractic treatments for Disc Injury is superior when compared to the application of heat, exercises, sitting right and postural education and even conventional physiotherapy.

A study published in 2006 in the very prestigious scientific journal, Spine, Showcase the excellent results of Chiropractic manipulation in treating disc injuries along with sciatic nerve pain or Lumbar Radiculopathy!

Featured Chiropractic Services
What Can We Help You With?

We strive to provide quality patient care. Learn more about our services here…

We set aside special time for New Patients and will do our best to schedule you in our first available appointment. Schedule your appointment today!

Our new patient forms are available for you here so they can be completed in the convenience of your home.